Always Look on the Bright Side of Life!

You experienced the process of aging when, around the age of six, you lost your first teeth. Six years later, you began to develop muscle, breasts, pubic hair, and growth. Invisible hormones began to create sensations that were way beyond your ability to control. For many of us, we looked forward to these changes. For others, not so much!

In the mid thirties and forties, you begin to notice a wrinkle or two, and grey hair begins to pop up in the most peculiar places. Perhaps the biological clock is ticking, pressing upon you the need to get started with baby-making.

In the late forties and into your fifties, your skin begins to loosen and get crepey. Boobs sag – and so does everything else. Erections are more difficult, and so is peeing. Little by little you experience physical changes that you heard were coming, but always believed it would never happen to you. Who me?

A few weeks back, I gave a talk at the Orcas Island Senior Center, regarding aging and independence. In that hour-and-a-half dialog, those 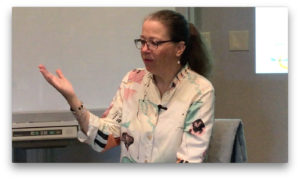 who attended began to share what it was like inside themselves – how they were participating – willingly or not, in the process of aging. No one minced words or used languaging that lessens the reality that life as we knew it has changed dramatically, and that there is no way out!

What was shared through this discussion included the degree to which many of us live in denial – the kind of denial that robs us of our freedom of choice. What was also shared was the degree to which so many of us isolate ourselves, because we believe that we are the only one going through the emotional upheavals of the process of aging. When we look around at how others are being, it appears as if everyone else has a handle on this aging thing. One person offered to the group; “If I share what aging is like for me, people will discover or come to believe there is something definitely wrong with me. So, instead of being found out, I isolate.”

So consider every individual – especially women in their early adulthood – 30’s and 40’s – who utilize plastic surgery to avoid and distract themselves from the natural progression and evolution of their being, physical and otherwise. Each of us, in our own way, wants to hold at bay the inevitable annihilation of the “me I want to hold onto.”

With aging, regardless of which stage of life we are talking about, there is a process of metamorphosis taking place. In truth, it scares the Bejeesus out of each and every one of us. Why? Because we don’t know how to do this thing called life. We would rather practice tried and true DENIAL – Don’t Even Know I AM Lying. Who wants to admit to themselves, or to anyone else, the degree to which they feel powerless and helpless? Um, like, no one!

Johnny Depp says “I don’t know how to be a grownup – I’ve never done it before.” Thanks Johnny, for being a poster child for Aging. None of us know how to do aging. Even those who consider themselves experts in the field – they too have to have their own personal experience of aging, for better or worse.

Each of us is here for the opportunity to figure out who we are as we transition through each developmental stage of aging. You are not alone! And though, it may look as if this stage of aging isn’t going to end well, the truth is, it is what you make it!

The other day, at the Orcas Senior Center, we had a second gathering of individuals who are curious enough to continue the discussion on aging. When discussing the brighter side of the aging process, one of the participants said, “It’s not an adventure if you couldn’t die doing it.” Who is up for an adventure?

And, most of us aren’t so thrilled with the idea that death is possible when facing an adventure. However in this particular adventure, called your life, death is not only a possibility it is inevitable.

The intention of these articles called Aging – Who Me?, is to provide a perspective and some support to examine and explore who each of us are in the midst of this human experience – regardless of where we are in the aging process. Sure, it may seem that we are attempting to make lemonade out of lemons, but why not? We’ve got the lemons – maybe we can make a lemon pie while we are at it – meringue included of course!

I love the saying of John Lennon: “Everything is great in the end. If it’s not great, it’s not the end!”

Why is Goal Setting Hard?

I was invited to write a piece for the Fesyk Marketing Blog on why goal setting is so hard. As always I learned a lot

Inward bound: Bootcamp for Self-Transformation takes place through 20 videos over 4 weeks, though you can work the program at your own pace. Each video

Letting It All Go

My friend Shannon asked me the other day, “So, Rosie, what are your intentions for this new year 2022?” I said, “My intention is to

Thank you for signing up! Please enjoy my Pre-Flight Checklist for Success in Life!
Read daily to check in with yourself & stay on track.